Character actions and reactions are what drive plot. How characters react to events is what moves the story forward.

You need to make sure your characters are taking the logical course in your story, based on the type of person they are. One of the ways to check that is to come up with a situation and run each of your characters through it. If you know your characters, you'll know right away how each will react to any situation or circumstance. Choose whichever possible action seems the most logical to move the story forward. This example uses the characters from My Mother Grows Wallflowers.

Situation:  A girl at a party gets very drunk. We don't know why. That's her story and one to tell another day. She ends up in a bedroom passed out, without clothes. Your character enters the scene.

Sam. What would he do?  Knowing Sam, he would cover her up. Maybe he’d glance at her body while doing it, he is 16 and healthy, but then he’d go find one of the girl's girlfriends, take her aside and tell her, so she could help her friend.

Mina. Well, chances are she wouldn't be at the party, but if she were—first, she would be embarrassed she saw a naked girl. Then she’d be embarrassed for the girl. She wouldn't touch her, but would back out the door and close it, trying to figure out if she should talk to Sam or Winona. She decides on Nona. She doesn't like the idea of Sam seeing another girl without clothes.

Robbie Fields. We all know someone like Robbie...he is going to take full advantage of the situation, depending the level of the girl's unconsciousness. And when he's done, he won't bother to cover her up or tell anyone--he'll just slither away like the snake he is.

Blair Whitman. Now, this is one vicious girl. Say the passed-out girl is her competition for prom queen. If it’s the 90’s, you know she’s going to take a ton of pictures with her Polaroid camera to post all over school or if it’s today, use her cell phone to take pictures to put on the internet and then invite everyone at the party to take a look.

Who else? How about Tom Evans?  I think he'd blush, back out of the room and go find Winona to ask her what to do.

Ori Miller. I had to think about him for a minute. I decided he would step in, see the girl, shake his head and leave the room. Would he even close the door? I think no at first, referring to her as a stupid Wasicu girl, but then he sees somebody like Robbie Fields in the hall. Not only does he close the door, he stands in front of it with his arms crossed, glaring at the kid as if daring him to say something until Robbie walks away. Though impatient, and not liking it one bit, Ori holds his position until a girl he deems reliable comes by--one of the girl's friends, or Nona or Mina.

These are my “people” and this is how they’d react. How about your characters? 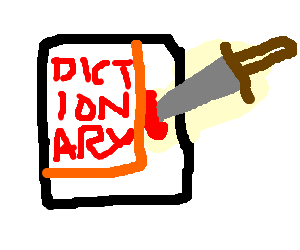 It’s a known fact: people murder the English language every time they open their mouth. I’ve read a few editor interviews in which they stated even though they know people do this, they don’t want to read it. They want dialogue written without dialect or slang.

I often think about those interviews as I’m writing conversation; nevertheless the voice in my head wins every time, and I write what I hear. It may be shoulda, gonna, whadda, but it’s what I hear. These imperfections make dialogue flow and often give you a hint about the character. When I’m writing, those editors’ words nag at me, and I might not drop the “g” off an –ing word or two, but for the most part, I continue to write it as I hear it. And nope, that ain’t gonna change anytime soon.
Posted by C. L. Howland at 4:17 AM No comments: